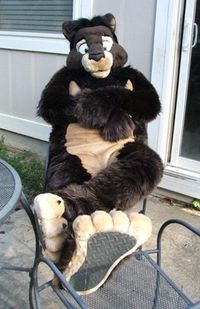 Kovu came in contact with the furry fandom via IRC. He is one of the founding members, along with Kerne and Steelclaw Fox, of the Florida based TallyFurs group.[2]

Kovu DaLion's fursona is a lion.

Kovu DaLion appeared with a new suit of his fursona[3] at Furloween 2010, constructed by Roofur Custom Mascot and Accessories, based on concept art by anthro artist FinalFlight.

Kovu is also a fursuit maker, having made two lion fursuits.[4][5]