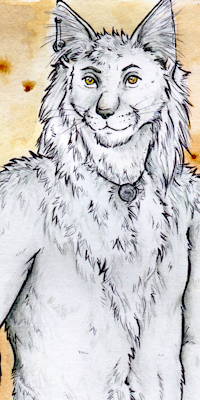 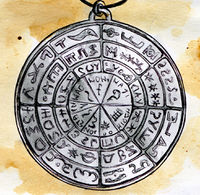 Kot – [Eng. Cat] is a member of the Polish furry fandom, and became a guest of the Scottish fandom in 2011. He is conventions organizer and prose (including furry-related) writer.

His fursona is a anthropomorphic Turkish Angora, and is fairly accurate representation of himself in real life. He is 187 cm (6 feet 5”) tall, has amber eyes with green thin ring on the edge of his irises. He is covered with semi-long white, velvet fur (characteristically longer on his collar and tail). His trademark is his medallion Prognostikon that is worn by him most of the time.

Kot made his first steps in the furry fandom thanks to WereKatt, a now dead website favouring furry transformation over strict furry ideology. His subsequent move being the discovery of the Transfur website in 2003.

Just after this period of his life he began to search further through the internet, staying for a while on Yerf (inactive,) and VCL. He started to find artists early on, those of note being Goldenwolf, Dark_Natasha, Kyoht, Chris Sawyer, Ayame, and Heather Bruton, and in around 2005 he discovered the Polfurs website, (which at the time only contained information on the fandom, without even a message board.) However, as he was not interested in interaction with the fandom at that time, Kot decided not to join.

Soon after this, Kot met his first furry, Red-IzaK, an artist specializing in drawings of birds and gryphons. Further wishing to find out more about furry art and goings-on, he visited a large number of smaller galleries and image boards.

On the 24th of June 2008, feeling a deeper need to meet more people from the fandom, Kot finally decided to join the Polish community. He registered his account on Polfurs, and since then has he has been an active member of the community. A couple of months later, when the Futrzaki.org website was created, he also joined up with that. From the same time he has also been present on the #Polfurs channel on IRC.

In 2009 he was also promoted to IRC channel operator for #Polfurs, and in 2011 joined the UKfur message board.

During his journeys in 2012, Kot visited Scotland staying there for several weeks. He managed to make contact with Scottish fandom, meeting a number furries from Edinburgh and its surrounding area. This resulted with an invitation given to one of their local furries – CamashRed - to Futerkon 2012.

Outside the fandom, Kot is an alumnus of one of Krakow's universities, having completed his masters in econometrics and information technology. Moreover, he is heavily experienced in non-profit event management, working for more than 6 years in non government organizations and academic entities. He is also trained in marketing and promotion, and is now working professionally as a financier and accountant. Currently he is employed and works for one of the world's largest brewing companies. 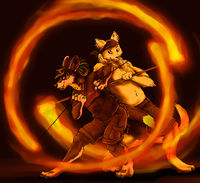 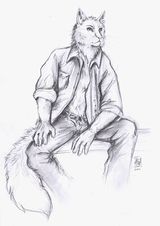