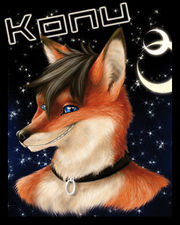 Konu Eikuku Hentaru (born December 30, 1986, in Berlin, Germany) is a furry artist and fursuiter who lives in Leipzig.

Konu's fursona is an anthropomorphic fox-wolf hybrid. He has a sleek shape and auburn-colored fur. His paws and his headfur are black and he has a special black pattern on his back. Since he is also a storyboard character in his own story (where he is the the captain of the space ship Blue Fox), he often wears the uniform of his fleet.

The full appellation of his species consists of his heritage (the Planet Xendor), his faith (ataric) and the species, which would be: Xendorian Anthropomorphic Ataric Fox-Wolf; mostly referred as Xaafw. Despite of that his friends often call him "Cheetah" because of his sleek figure and fast movements.

He can also be found on Second Life as Konu Yoshikawa.

Konu spent the spare time in his childhood with the Berlin park railway, being the conductor and a dispatcher. End of 2004, half a year, just before the start of his administration, he stopped working there. After he has finished his apprenticeship in the summer of 2008, Konu had been employed until the end of 2010 at Railion Deutschland AG as engine driver and foreman shunter. Now he works in Leipzig as a city railway driver.

Konu is a Furry artist, movie director, a fursuiter and a fursuitmaker. His artwork can be seen on Deviantart and Furaffinity. He is the main organizer of several Furryevents, the SFD , the TJiL , the Socom and the EAST. By 2009, he was next to the organizing most of the time employed as a cook in the kitchen. Most Con artwork has been contributed by him. For example, the posters and banners of the Saxony Fur Dance and TJiL . On the CeSFur 2010, he finished the Artist Ambush on the second place behind and also won the second place on the CesFur 2011th. On the BerliCon 4-5, he had worked as contact person for fursuiters. A conflict with the con management ended the previous relationship. On the first Mega Ossi Con (MOC) in 2009 and 2010 he worked also as contact person for fursuiters. To Cesfur 2009 to 2011 he arranged with LeTigre for the Technical support Furdance, and the Fursuitgameshow Fursuitlounge which they accounted for half of this equipment and is ready for the CeSFur since 2011 now on staff. Since the first ZodiaCon in 2011 he and LeTigre also belong to the stage crew. As a cameraman and director, he is with Saxon Fur TV worked and worked since 2010 with the Polish group of Baku and Louq TV together.

The art he's currently making can be viewed at Furaffinity: [1]

In Second Life he is known as Konu Yoshikawa, here he is with his snow leopard Murzim but rarely active. 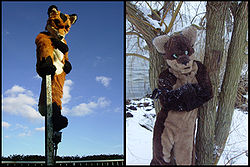 2006 he made his first fursuit named Konu dedicated to representing his Fursona. On the first time he stepped on the EF 13 during Stage Fever sketch Resident Fur and The Powsums crwals tonight on. He also participated in the fursuit game show.

His second fursuit is called Chibi-Rangfar and depicts the holographic avatar of his spaceship. Since he is just a holograph he has no real species but it can be imagined as a hybrid of German Shepherd and fox. The first convention he appeared at was ČeSFuR. He could also be seen at Eurofurence 14 where he took part in both dances until the end, and won the Fursuit Game Show together with Lysander (worn by his mate LeTigre).

New Year in the Kingdom Kettwig[edit]