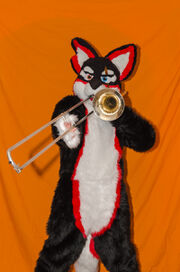 Kontra with trombone. Fursuit by Kodimade.

Kontra, also known as KryptoKontra, is a fursuiter, furry musician, professional performer and educator known for playing trombone[1] and keyboard who lives in New Jersey, USA, with his mate Yenoc.

Kontra and Yenoc have attended Anthrocon annually since 2011, where Kontra usually joins with others in live performances on stage. He has played alongside Fox Amoore, Pepper Coyote, Rhubarb The Bear, Cosmik, Runtt, Alexander James Adams, and several others. Kontra also helps gather instrumentalists to march and perform in Anthrocon's annual fursuit parade. 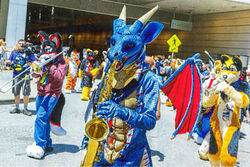 Left to right: Kontra, Aristoth and Azflip during the 2018 Anthrocon fursuit parade.

Kontra's fursona is a mischievous wolf-husky ("wusky") hybrid with heterochromia, a scar through his left (blue) eye, and a piece of his right ear missing, presumably from a past event.