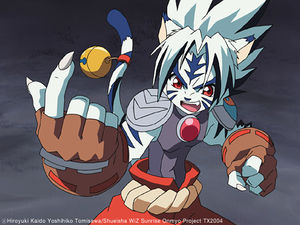 Kogenta is a Shikigami (Ritual God) which is kind of spirit in Japanese mythology summoned to serve a practitioner of onmyōdō, much like a western familiar. He plays as Riku Tachibana's Shikigami in an anime called Onmyou Taisenki.

There are 24 families of Shikigami (three per family for a total of 72) to represent each Solar term. These monsters are extremely powerful, and their special abilities (hissatsu waza, 必殺術, literally 'certain-kill techniques') are activated when their owners use certain sequences of In. Every Shikigami has its own In sequences and some have special weapons, which are also activated by the In. Every Shikigami has its own name and a class/family. For example, Byakko no Kogenta's name means Kogenta of the Byakko (白虎 White Tiger, one of the four Japanese great Gods; the other three are Seiryuu (青龍 blue dragon), Genbu (玄武, representing the family of turtle-type shikigami), and Suzaku (朱雀, phoenix)) family. Class names are usually named after gods and flowers.

Kogenta is a Shikigami, and belongs to the Byakko species (白虎, white tiger), known for their trust and loyalty. Even though it describes him, he still is vulgar and pretentious, and has an hyperactive nature. He has seems to have some unwilling feline gestures, as fur bristling, or hissing sounds when angry. He owns a sword, called "Saikaido Kotetsu".

In the manga version, he's the Shikigami of a boy, Yakumo, who requests his help to fight against the devil who had petrified his father. In the anime version, he is the Shikigami of an weak orphan, Riku Tachibana, who has to save the world. The story of the manga tells that his former name was Akatsuki (白虎のアカツキ, Byakko no Akatsuki). He has been given this name by Yakumo's father, before Yakumo called him "Kogenta"(コゲンタ). It seems he doesn't mind about what his name is, as long as he has one.

Nevertheless, in the anime, he introduces himself as "the great Kogenta of the Byakko" (Ore-sama ha Byakko no Kogenta) when summoned by Riku for the first time. Kogenta doesn't show a lot of what he likes, except fighting. In the anime version, he admits in an episode that the sound of a cat bell used to make him purr a lot (it could explain why he wears one on his tail), reacts violently everytime he is comparated, or said to be a cat. ("Ore wa neko janee ! Byakko desu !" - "I'm not a cat ! I'm a White Tiger!")