Koala And Sheep A Love Story 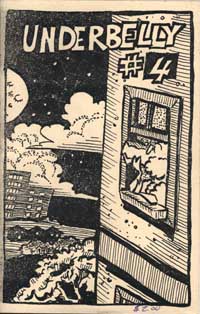 The introduction in Underbelly #4 says "The faces of the people in this particular slice of life drama have been disguised to protect the innocent, (..)" so it appears that Koala And Sheep is based on a true story.

The story is almost wordless, with speech balloons and thought bubbles mainly consisting of symbols and images. No names are spelled out, except perhaps in the story title. Considering the story title and that people's faces appear in speech balloons, a reasonable conclusion is that the main characters' names are Sheep and Koala.

At school, Sheep meets Koala. Shortly after meeting, Koala tells Sheep that Koala is in love with another female (appears to be a vixen). Sheep is annoyed but doesn't let it show, and on the way home realizes she's in love with Koala and her love is the reason for her annoyance. The next few weeks (lasting 19 pages) have Sheep going through a roller-coaster of emotions.

One day, Sheep is at grocery store on a pier. She leaves the store and goes to the railing to enjoy the view. While she's at the railing she notices winged-hearts have flown towards her and she looks to see where they came from. She sees a nice looking giraffe smiling at her and she smiles back at the giraffe.

The next day, Sheep is hailed by Koala but Koala doesn't look happy. It turns out the vixen that Koala was dating has dumped Koala and gone back to be with her fox mate. Sheep thinks of Koala, the vixen, the fox and a rodent in an exercise wheel. Sheep tries to console Koala with a pat on the shoulder and walks away.

A montage shows Sheep doing schoolwork, having a nice snowball fight with giraffe, in bed with giraffe and graduating.

The last page starts with Sheep clearing out her locker and Koala clears his throat to get Sheep's attention. They smile at each other and give each other a big hug. Koala walks off, waving goodbye.