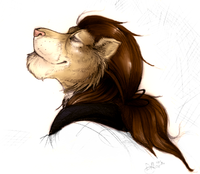 Knuxlight is the current main artist of Carpe Diem webcomic. His work for Carpe Diem was announced on 2009 January 5, but his name was not announced.[2] His involvement was hinted at on 2009 January 9,[3] but the first Carpe Diem LiveJournal community post naming him as the new artist wasn't until 2009 April 27.[4]

Knuxlight drew and colored the cover to Carpe Diem Issue 11, which debuted at Further Confusion 2010.