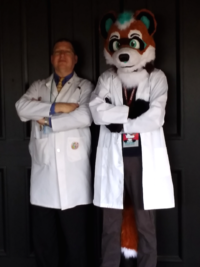 Klyis (or Klyis the Weazel) is a fursuiter and YouTuber who lives in the Phoenix metropolitan area of Arizona, USA.

Klyis' fursona is a hybrid of long-tailed weasel and black-footed ferret. He often plays the role of a mad scientist and occasionally a kamaitachi. Klyis has a fursuit of his character which he made himself, and he often suits at local meets in Arizona as well as on his YouTube channel.