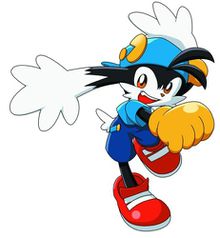 Klonoa, in his current design 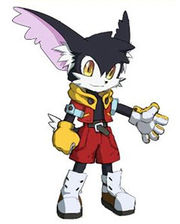 Klonoa of the Wind is an anthropomorphic cat[notes 1] who made his appearance in the Namco's Klonoa series. The character was designed by Yoshihiko Arai. 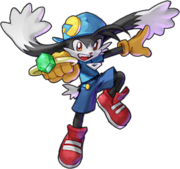 Klonoa's ring allows him to fire wind bullets, which inflate things. Upon inflating an enemy, Klonoa can do various things. He can use the enemy to Double Jump, which would in turn throw the enemy or thing down wards and destroy them. Afterwards he could hover with his ears. Klonoa can also fling inflated enemies forward into other enemies, or into objects.

Klonoa has very large ears and they enable him to fly for a short time.

The ring also forms a sword in later games. It also forms a sort of hammer-like object. (Both of these items appear in Klonoa Heroes, a Japan-Only GBA game)

In the furry community, Klonoa is very often imagined as being best friends with Tails in fanfiction. Klonoa is also referred to by many members in the fandom as a cabbit (Cat/Rabbit), despite the fact that Namco have (supposedly) stated that, while they don't want to give Klonoa an official species, they do like to think that he is a Long-eared Cat. He is also often paired with Lolo the monkey girl priestess in various romantic and non-romantic fanfiction.