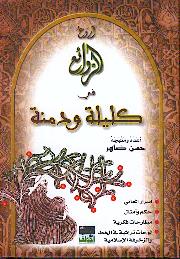 Klelh and Demenh, also known as Kalilag and Damnag, Kalila and Dimna or more commonly The Panchatantra is a collection of Sanskrit as well as Buddhist animal fables in verse and prose. All the tales have a moral message, and many have a political undertone. The original Sanskrit text, written around 200 BC, is attributed to Vishnu Sarma. However, based as it is on older oral traditions, its antecedents among storytellers probably hark back to the origins of language and the subcontinent's earliest social groupings of hunting and fishing folk gathered around campfires. Multiple comparisons have been drawn to the more well-known Aesop's Fables as well as 1001 Arabian Nights.

The Panchatantra gained its current form within the 4th — 6th centuries AD. It was exported north to Tibet and China and east to South East Asia by Buddhist Monks on pilgrimage.

Kalila and Dimna are the names of two jackals who are retainers to a lion king and their adventures as well as the stories they and other characters tell one another make up half of the book's length, which led to their single part/section/chapter becoming the generic, classical name for the whole book.

Klelh and Demenh was translated into English by Sir Thomas North in 1570.