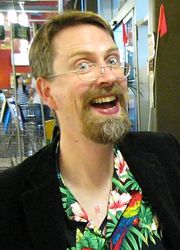 As of 2021, his ongoing comics include the adventures of Savage Squirrel, The Mink, and Happy Jack (an Iron Man-type character wearing a powered suit); the sex comedy Here There Be Dragons; as well as the superheroic Komos & Goldie (a collaboration with Joe Strike).