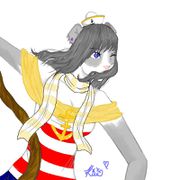 Kiwi, as drawn by herself 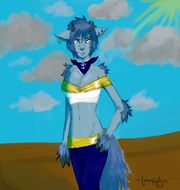 KiwiChan, or Kiwi, also known as doomcookie, formerly as Kiwicow, is furry artist who lives in Bear, Delaware, USA.

KiwiChan is an active member of the Delaware Furs community, one of the top posters on the Furst State Delaware forums.

When she was 16 around '08, Kiwi's fursona was originally a cow/human/rabbit hybrid. It was her first try at creating a character, so she was more concerned with what animals she liked than which ones suited her best. She chose (one of her favorite animals at the time) a cow as her main image and added parts of rabbit to create a cowbit.

This changed around late January of '09, when she chose a panda/skunk-hybrid that better suited her, more commonly known to her and her friends as the "Punk". This fursona not only suited her appearance but her personality, which is probably the reason she has had the same fursona since. 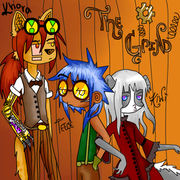 Kiwi posts all of her art to either Furaffinity.net or The Furst State forums. She draws both digital and traditional artwork, using either a tablet and Open Canvas, or Prisma colored markers and pencils. Her style is heavily influenced by manga, and includes "Chibi" artwork as well as full sized Characters. Kiwi has been drawing most of her life as well as writing and various other unrefined talents. She uses her art as a form of self expression as most artists do, so that other people can see what she sees to the best of her ability.

She is the creator of the webcomic Semiofficial.

The grind is a comic Kiwi is the author of under the name "doomcookie". She has been working on the story off and on for two or three years, but just a few months ago started seriously working on it.

The following is a summary from the site on which the comic is posted.

Kiwi spends most of her time out of the house with her friends, but when she's at home or otherwize inside she has a wide variety of interests. Kiwi takes part in artistic activities such as sewing, crafting, writing, and cooking, but she also takes an interest in the basics. She reads a great deal of books and plays video games, mostly JRPG, fighting, racing and 3PS games. Her favorite and perhaps least known pass time is dressing up in various outfits and costumes. (Not so much unexpected as it is unknown).