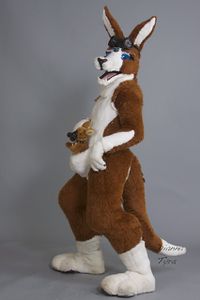 Kiva Kangaroo is a female fursuiter and artist. Her fursona is a red kangaroo.

Kiva's fursuit was constructed by Kiva herself. She carries her baby (Kip, also built by Kiva) in her pouch most of the time, but has also been spotted with a mini-keg instead. The fursuit and baby debuted at Further Confusion 2011. Since the original construction there have been a few cosmetic adjustments, but the suit largely remains the same.