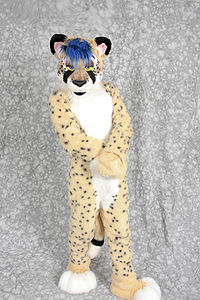 Foxplay (born April 6, 1985)[1] is a furry artist and fursuiter who lives in Ypsilanti, Michigan, U.S.A.[1] His fursona is a spotty fox, or referred to as a Fox/cheetah Hybrid, the fox being more prevelant in the cross but he has fursuits of other characters as well.

Foxplay stands at 5'11" and weighs 135lbs. Outside the furry fandom Foxplay is a Train Dispatcher, he also is a certified MT (massage therapist)and holds a national certification, NCTMB. His hobbies include weight lifting/gym, video games, drawing, and reading (mainly fantasy and D&D books) as well as board/card games including MTG (Magic the gathering), and DnD

In Foxplay's spare time he is currently working on a Fantasy Comic "The Lost wizard" which follows the life and journeys of a young fennec fox wizard named Kalik, it can be viewed on his FA http://www.furaffinity.net/gallery/foxplay/

Foxplay's first fursuit character was Kiv Cheetah, a cheetah with mismatched eyes (one purple, one green), and a thatch of deep blue head fur. He was constructed by MixedCandy.[2]