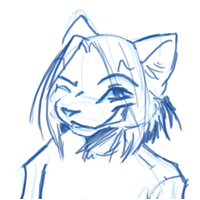 Kittiah has been a member of the UK Furry scene since 2000, originally attending mostly NorthernFurs meets. He is now a regular attendee of the tri-weekly LondonFurs meets, and joined the organising sub-committee in November 2011.[2]

Working as a System Administrator and Technical Liaison for a major international music company, he has many pastimes, including videogaming, clubbing, DJing and juggling.

Kittiah joined the RBW staff in 2008, initially as a DJ, but this role quickly expanded to being one of the four senior staff members, looking after all aspects of Music and Entertainment for the convention.

Kittiah co-hosts the Thursday Night Hard Drive, along with his housemate Miyabi. The Hard Drive is an internet radio show aimed at exposing potential new and alternative music to its listeners. The show is broadcast live every Thursday night from 8pm GMT.[3].