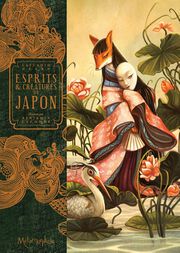 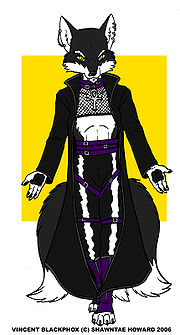 In Japanese mythology, a fox who lives long enough and gains a great deal of knowledge will reach an enlightened state, the Eastern sense of the 'fox spirit'. These supernatural beings serve as the cultural trickster, akin to Loki, Coyote, Eris, and many others; their stories both guide humankind along a proper moral path and explain the mechanics of the physical world. Some kitsune were said to serve Inari Ōkami (gods of rice) and guard their shrines, while others were wild and may have been either benevolent or malicious, depending on the particular story they played a role in. Some reward the honest, pious, hardworking, or poor. Others manipulate powerful leaders to evil, and still, others are given to arson, murder, and rape. Above all, they seem to take pleasure in teaching humility to and punishing hubris in the proud, greedy, and powerful. More information about the traditional kitsune can be found in the links at the end of this article; the rest focuses on the furry concept of the kitsune.

"Myobu" Kitsune sometimes follow a set of rules or law (set forth by their matron deity of Inari.) that may include never harming anyone unless in defense of a third party, never killing, keeping their word at any cost, and other things along those lines. Nevertheless, they are more of the benevolent sort of Kitsune described above, playing tricks on proud samurai and corrupt nobles, etc. Ones that serve Inari sometimes wear a red scarf or bandanna around their necks to identify themselves as followers of Inari.

"Nogitsune" Kitsune do not follow any rules but their own, do not follow Inari, and are typically regarded to as evil. They are more of the sort mentioned above that intend harm on the innocent, will kill mortals readily, will doom a farmer struggling to support their family, and other nefarious deeds. The nine-tailed foxes of Chinese legend and other Asian countries besides Japan may be identified as "Nogitsune."

The types of Kitsune are better known as zenko (善狐, literally good foxes) and yako (野狐, literally field foxes, also called nogitsune). Zenko Kitsune are benevolent creatures, heavily associated with the god Inari, and are sometimes simply called Inari foxes. Yako foxes are mischievous, and sometimes even malevolent. They love to play tricks on humans and to disturb the peace.

Other types of Kitsune include the ninko, an invisible fox spirit who is only perceived by human beings when it possesses them. Another tradition classifies Kitsune by separating them into one of thirteen types, which are defined by the supernatural ability the Kitsune possesses.

Some sources say that a kitsune's true form is that of a ghost-like spirit, and they may interact with mortals via three ways: possessing a mortal, "Manifesting" or creating an "Avatar." Manifestation has a Kitsune creating a full physical body for themselves by spending a constant amount of chi, creating a strong body that is agile and attractive but not leaving much room for other chi-based actions. The creation of an Avatar creates a weak, cheap on chi and easily destroyed body for the kitsune to interact with others with, and still lets one spend chi on other things. When the body the kitsune is inhabiting is destroyed, the kitsune reverts to their true spirit form, their most vulnerable form, though one on which physical attacks have little to no effect. Kitsune restore their Chi supply by feeding, just as said above.

Kamisama Kiss - manga and anime, the main character is a Kitsune.

In furry lore, kitsune are born either from one or two kitsune parents or a drifting kitsune soul possessing an unborn child's body. Mortals may also be turned into kitsune through 'sharing' spirit with another kitsune, or by divine figures. Some hold that kitsune live to the age of 1000 years, and then 'ascend' past the mortal world to a sort of kitsune nirvana. In some legends when a Kitsune has at least five tails (up to nine) it becomes a Kyuubi. Others disregard any upper limit. (After all, what is a thousand years to those on other planets or the void of space?) Still, others say the Kitsune may be reborn, starting their lives all over again, when they become bored of the nirvana-like state.

Kitsune might have been tied to the 13 Oriental elements in the original folklore, but in furry are almost always depicted as belonging to one of many elements, including the 'classical' elements (earth, fire, wind, and water), primal forces (good, evil, time), various scenes in nature (mountain, ocean, river, forest), and various artistic pursuits (dance, music, painting). Other, original elements have been invented for specific characters. To survive, a kitsune must be immersed in his or her element, or drain chi from living beings. Chi may be drained in many ways, but the most common is sexual intercourse and stealing breath. Because of this, many kitsune in old stories are depicted as 'evil', intent on killing humans.

Kitsune are rated in power by the number of tails they have. Very young kitsune have one tail; the most powerful mortal kitsune have nine tails (Japanese: 九尾, kyūbi). In lore, the Goddess of Kitsune, Inari, is usually depicted as being the only ten-tailed kitsune. This goddess -- a symbol of fertility, power, and immortality -- is also sometimes depicted in furry lore as a hermaphrodite, possibly because the deity Inari is often depicted as being of either gender. In most stories, age is the sole determinant of the number of tails, and the number of tails determines the kitsune's power. In others, tails may be awarded by more powerful forces as a reward for services performed or exceptional deeds accomplished.

Kitsune can feed on live beings, but also on elements. Whatever is being fed on will weaken, but won't necessarily be destroyed. In the case of live beings, they will weaken and become pale. When feeding on elements, the kitsune can snuff out flames, cause the land to dry and crack, water to become still and stale, and sea life to die. Young kitsune may not have a very noticeable effect, but older and more powerful ones could present a considerable problem for the area where they decided to manifest.