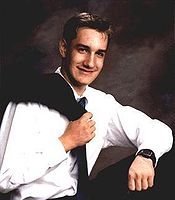 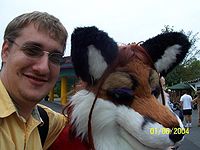 Kit Karamak is seen here with Hiromi Kitsune at the 2006 PandaGuy's Picnic outside of Washington, DC.

Kit Karamak, aka Ken Weaver, (born May 1, 1980) is a writer and aspiring novelist. He has lived in many areas including Baltimore, Maryland; Washington, DC; Great Lakes, Illinois; Richmond, Virginia; Knoxville, Tennessee; and Holly Hill, Florida.[1] He started out writing fan fiction stories about video games, original furry and non-morphic fiction pieces, including Star Fox and Sly Cooper stories. He's also an aspiring drummer. 'Kit' is short for Kitsune. Kit's avatar is a normal one-tailed fox, not a magic endowed kitsune of Inari lore.

Ken Weaver uses the pen name "Kit-Karamak" (spelled with a hyphen), on the websites FanFiction.Net, FanStory.com, and FictionPress.com. He sometimes uses the moniker "KitWriter" as a blogging name for various online forums.

Kit remains a huge supporter of furry fiction writing and has attended various writing panels at conventions, like Anthrocon. His material includes both original and fan fiction work. He often applies what he's learned to the critique he offers to fellow writers.

Kit spends a lot of his time writing when he's not rocking out.

Based on reader feedback and the amount of 'views' each story receives (FanFiction records his stats in the hundreds-of-thousands for views to his stories with all chapters combined), Kit is technically known better for his writing than his music. His Star Fox stories include a series of pieces, entitled Reflections. These include, but are not limited to: Reflections of Krystal, Reflections of the Future, "Reflections of a New Generation", Reflections of Regret, Reflections of Marcus McCloud, Reflections of Peppy and Reflections of StarFox. The last four are still in progress. He's also written other Star Fox fan fiction stories and enjoys writing original manuscripts.

Kit also writes fan fictions about Sly Cooper, another video game featuring an anthropomorphic character. He has three novel-length fan fictions: The Lament of Carmelita (finished in 2006), Spy Cooper (finished in 2010), and Dawn of Progeny (Finished in 2011). He has also written several short stories in the Sly Cooper fandom, usually with a holiday theme such as Valentine's Day and Christmas. These short stories have each garnished over ten thousand hits each.

He has a Castlevania story involving a werewolf, titled The Claws of Fate. He is now working on an original story. Details to follow.

Examples of his writing advice for young writers can be found here:

Kit and Richie look identical at most angles 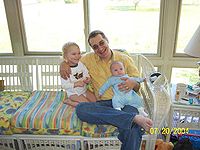 Kit rarely sees Thomas and Tyler as they live several states away with their mother.

Ken has had several romantic relationships; he is currently married to his second wife Aimée Jo whom he married in May 2015.

Kit plays both the drums and guitar

Kit has played the drums since about 1995 and has performed in multiple local Maryland bands since around the summer of 2000.

Kit plays the guitar, bass and drums. Some pictures of his on-stage performances can be found throughout the Internet. He prefers not to sing.