Kirrus are one of the alien furry species in the Furscape MUCK. They were first mentioned by unci as living on the fictional planet Jalan (also named Wildplanet). 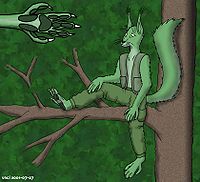 Kirrus vaguely resemble a large squirrel, with pointed snout, large bushy tail and tufted ears. They have soft fur, ranging in colour from grey to green, with light grey or white accents. The large green eyes are of an alien shape. Hands and feet have five fingers each, with the first and fifth opposable, facilitating both climbing in trees and doing precision work. They can use all four paws as "hands" if needed, but are capable of bipedal walking as well. Whiskers are present near the nose-tip and above the eyes. With this body shape, they are best adapted to an arboreal environment.

Chemical receptors embedded in the skin of the insides of hands and feet enable the Kirrus to sense substances present in and on the ground.

Taking breath is done via the nose only, and exhaling via the mouth only.

Both genders have a pouch in the lower abdominal region, used to carry their children until they are about a year old. The pouch is sometimes also used for carrying other objects.

Omnivores by their teeth and digestive system, most Kirrus are vegetarians. They eat wild plants, as well as ones grown on their farms. They are well adapted to the plants growing on Jalan and have developed a refined cuisine, their meals mostly consist of salads with fruit juices and wild spices and are usually not cooked. Kirru recipes are known as exotic delicacies among recoms and can be found at other planets as well, though they depend a lot on ingredients growing in the wilderness of Jalan, which are only exported in small quantities.

Kirrus are social beings, forming families and living in groups of at least 20 members in small villages, to large cities. As a logical consequence of their natural adaptations, they prefer living in forests, and their villages and cities are usually a dense forest with treehouses that are hard to reach for non-arboreal species.

The small communities at least are very egalitarian societies. On their home planet Kirronia, a very high level of social structure, science and technology was archived, even though their organization may appear chaotic to outsiders, but Kirrus are also capable to live in less advanced conditions on other planets. Their curiosity prepares them to be good scientists, and to learn about and from other species. Both science and crafts are valued among the Kirru. A good number of trees and other plants were modified by Kirru breeders, to provide better strength for treehouses (their preferred living environment), or for food and medicine purposes.

Living in serial monogamy, Kirru parents raise their child (or children, up to three) together, until the young reach the age of ten. With ten years, Kirrus are full-grown and considered adults.

Despite being covered with fur, Kirrus wear clothes, notably trousers (with opening for the tail) and protective clothing. Heads, hands, feet and tail almost always remain uncovered, unless protection from hazards is required, and the pouch normally remains accessible. Wearing no clothes at all is not generally considered inappropriate. Clothing is primarily worn for ceremonial purposes and some practical functions such as protection against rain or having pockets.

Kirrus living at Jalan have a common language, consisting of melodious chirping sounds and hard consonants. Each type of word has a specific ending - for example, male names end by "-ar", "-or" or "-ur", female names by "-ra", "-re" or "-ri". Kirru children learn the language to its full extent in less than a year.

Kirrus are usually good at learning other languages, but due to the differences in their voice apparatus, will always speak with a characteristic accent. A few recoms have been able to learn understanding the Kirru language, but pronouncing it is very difficult for other species.

Kirrus are the most advanced of the species of Kirronia, and were the first to develop and build spaceships capable of interstellar spaceflight there. Scientists started research flights to other planets, including Earth. Kirru biologists arrived on Earth in the year 1400, unnoticed by humans, with the spaceship Queckshiaulriaul and took some samples of the Himalayan flora and fauna with them.

At the same time, an anti-science religious movement came to power on Kirronia, forcing many excellent scientists (among other dissenters) to leave the planet by spaceships, and settle elsewhere. The Earth expedition was diverted to planet Jalan. A defect in the spaceship forced the crew to stay on the planet, where their descendants have lived for centuries since.

The Kirrus not only managed to bring themselves to Jalan, but let free the animals they took from Earth there, most notably snow leopards. All these species were able to survive on Jalan, and integrated surprisingly well with the local ecosystem.

One result of genetic experiments of early Kirru scientists is the irbis species, closely related to snow leopards, but capable of speech and upright walking.