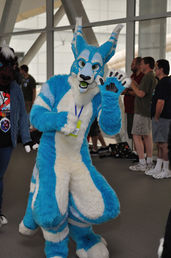 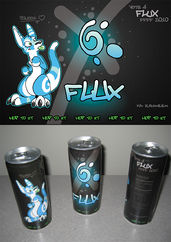 Kiro Neem is an artist and fursuiter.

Kiro's fursuit, Flux, is a male blue kangaroo with tribal patterns. The character does not speak, but will instead squeak, as can be seen in a number of YouTube videos.

Flux was constructed by Kiro himself in early 2009, was previewed as a partial at Furry Connection North 2009, and then made his first appearance at Anthrocon 2009. Since the original construction there have been a few cosmetic adjustments, but the suit largely remains the same.

In 2010 a limited supply of custom branded energy drinks were created. The cans were designed after and featured the character Flux. While in suit the drinks were passed out at Anthrocon 2010.