King Leonardo and His Short Subjects 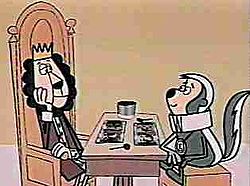 King Leonardo and his Short Subjects was an animated cartoon series released in 1960 by Total Television (which would later rename itself Leonardo Productions after the main character of this show).

The show focused on Leonardo, a lion, who was the inept yet well-meaning king of the fictional African nation of Bongo Congo, and his incompetent brother Itchy's attempts to overthrow Leonardo and rule the kingdom himself along with his friend (and leader) Biggie Rat, a gangster with an Edward G. Robinson-type accent. They were later both employed by Mr. Mad, a mad scientist with a domineering personality (easily cowing even the strong-willed Biggie) and his own nefarious plans for Bongo Congo, not to mention a creepy echoing voice.

Leonardo was assisted by Odie Cologne, a mild-mannered skunk (on the theme song he was referred to as "Odio Cologne").

Each half-hour episode of King Leonardo consisted of three segments, the King Leonardo segment, Tooter Turtle, about the adventures of a turtle who has a wizard lizard transport him to various settings only to realize he was better off at home, and Twinkles the Elephant. The main purpose of this segment was to advertise Twinkles Cereal, a product of the show's chief sponsor General Mills. This segment would be removed when the show was syndicated during the 1980s.

Leonardo cartoons were also sometimes paired up with The Hunter, a cartoon about a Southern-accented crime-fighting bloodhound who (while also behaving like Foghorn Leghorn including the Senator Claghorn jokes) often chased after an evil fox, on Total TV's more popular series Underdog. In addition,non-Total Television animated shorts were aired on the program which included The Fox and the Crow and Li'l Abner produced by Frank Tashlin for Columbia Pictures/Screen Gems.

King Leonardo and his Short Subjects was part of NBC's Saturday Morning lineup until 1963.

The animation for this show was produced by Gamma Productions, the same Mexican studio that did much of the work for Jay Ward.

The similar animation style and the fact that King Leonardo shorts have often been packaged with Jay Ward shows such as Rocky and Bullwinkle and George of the Jungle in syndication have led many viewers to believe that it is a Ward show.

King Leonardo never attained the popularity of Total Television's other series, Underdog and Tennessee Tuxedo, and is hardly ever aired on television today. As of July 30, 2006, the Black Family Channel is airing this show on it's "BFC Kids TV" block.

The characters of this show were also featured in an eight-issue comic book produced by Dell Comics and Gold Key.