Kima is a male furry living in Liberty, New York , where he takes care of his father.
He is an avid gamer, variety streamer, and has an affinity for Virtual Reality gaming, being part of several VR communities. 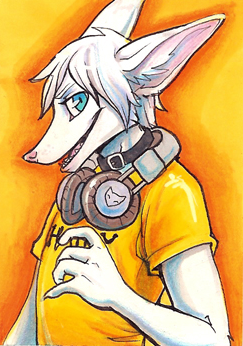 Kima by squeedgemonster on FA

Kima's main character is a mixture between a fennec and an arctic fox with pure white fur. His eyes are multichromatic between ocean and sky blue.
He is quite lithe in stature, but of a mild athletic build. His ears and tail show the mixture between the species of fox, having long thin ears and a large fluffy tail.

A deeper story exists for the character where he is based in a completely different world and galaxy than our own.

Other characters include his "DJ pseudonym" K-Light, and a skullbeast character named Karnage.

He is a very open minded individual who is generally caring to those he meets, sometimes keeping to people he already knows or friends of friends due to being rather timid, but isn't afraid to meet new people.
If seen at a convention, he is there to have fun, rarely taking pictures, only taking video if the opportunity can be planned. He only goes to a panel if it's of great interest and doesn't conflict being with friends.