Kiki-Uma, also known as Kiki, Tenteraten or Tsukurikake_CR, Is a Japanese Artist from Tokyo, Japan. Currently living in Osaka. 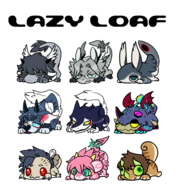 Most notably known and recognized for her unique caricature/cartoon style she uses in her original idea of the Lazy Loafs.

"Lazy Loaf" is a compact, "dumpling"-like chibi representation of a character, with fixed position template. Each Loaf comes in animated and static versions. Due to crispy style and fun idea, Loafs quickly became popular, are fairly widespread and appreciated on Furaffinity - art community they were first introduced.

Kiki is also recognized for Co-Author position within Vilous, she is the main contributor behind the famous fantasy and science fiction world from where General Rain Silves and Sergals originate from.

Most if not all of the Vilous lore, canon information and story elements found within the manga comic were created by her. She is currently and actively working on Vilous as the producer and supervisor alongside Mick Ono, the main Visual artist and designer behind Vilous itself. In addition to this, some of her Vilous idea crossed over within her own headworld, known as "Tsukurikake"

Tsukurikake (月理欠, つくりかけ) is the main headworld of Kiki-Uma, an abstract and spiritual-based fantasy world, inspired by her thoughts and general feelings found within the heart. A secondary fantasy world, going by the name of Tenteraten (天照転, てんてらてん) can also be found within her works, it features a more dynamic and physical representation, whilst including some of her more NSFW works and content, alongside even some silly, humorous creations such as EU the Kaiju!

Kiki has also attended MFF2018 as a representative of the Vilous team and creator of Tsukurikake/ Tenteraten.