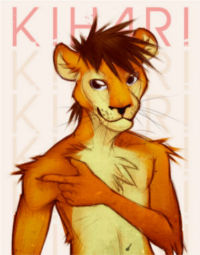 Kihari is a furry who lives in the United States. His fursona is an African lion. He is the founder of the social art gallery website Weasyl and was the project's original software developer. He retired as the owner of Weasyl in November 2014, and stepped down as a staff member in April 2016.

Kihari has been an active member of the Lion King fandom since 2002, and of the wider furry fandom since 2009. Although his primary involvement with the fandom is online, he attended the Delaware Furbowl in May 2013.