KierinHyena, formerly known as Ryukaza and NeoWulf (real name Jesse; born in April of 1991, is a furry artist and writer babyfur/diaperfur from Wisconsin.

KierinHyena joined the fandom in April of 2008 as a dragon named Ryukaza, shortly after turning 17. His influence into the fandom is stated to be the Digimon franchise and the accidental stumbling upon Yiffstar. Not long after joining the fandom he dropped the Ryukaza alias and joined the Furnet IRC server as NeoWulf, changing his name once more later that year in October to KierinHyena. 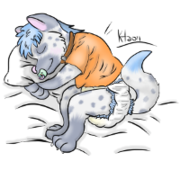 Kierin is an albino spotted hyena with white fur, blue tinted light gray hand and feet paws, pink eyes and nose, and dark blue hair/tailtip (his cub form has light blue hair). His age ranges from the age of 3 1/2 to 21 depending on factors like setting and Kierin's current mood. Kierin, regardless of being in cub form or adult, has a tendency to be diapered at all times.

As for the name origin, KierinHyena stated:

Kierin began roleplaying in Digimon fan forums, but was often k-lined due to bad grammar and writing skills. In mid 2008 he wrote two dragon yiff stories; and posted them to Yiffstar, but later removed them in 2009 because of his un-satisfication with them due to his harsh improvement in writing.

In 2009 he wrote his diaperfur themed short story titled A New Life[2] which showed much improvement in his writing abilities and garnered positive critique and comments from friends,[citation needed] as well as fans.[3] He is currently debating the finish and release of a second chapter, and has since then released a much shorter lighthearted babyfur story that takes place in a daycare setting, stating it may become a series of short stories that will follow a Rugratz babyfur themed style.

His stated influence is Stephen King, he said that he improved his style of writing by analyzing King's own style and execution while he was on his King binge in 2009.