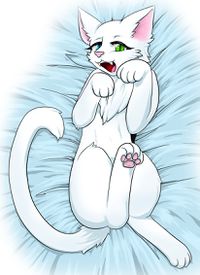 Khord was born in Rochester, New York, and later moved to the Bay Area when he was 9. He stayed there until he was 24 and moved to Illinois, New York City, and then to Rio Vista, California.

He started playing piano at the age of 4; drawing at 6; acting, dancing and singing at 9; songwriting at 12; filmmaking at 13; and animation at 14. Khord received his Bachelor of Music in Music Composition from San Jose State University in 2010.

Khord also has interests in genealogy, musicology, dance, improvisation, psychology, and politics. He has two children from a former marriage.

Khord's professional career is being a background actor. He has been seen in various TV shows, feature films, short films, student films, and commercials.

His secondary career is playing piano. He has played piano for graduations, parties, in bands, orchestras, in musical pits, and studio recordings. He also sang professionally from 2007-2011.

He grew interested in furry culture in high school and started browsing VCL in 2001. He made his first interaction with a furry on FurryNation in 2007 and was introduced to conventions and furmeets in 2008 by the first furry he met, Emerald Sage, at San Jose State University. He attended Crack Chicken frequently from 2008-2010.

Khord started actively instant-messaging furries in April 2009, after being invited to Skype by Iaran Frye-Carter, who is a furry he met through Yahoo! Answers. After that he started adding thousands of furries from the FA member list and various other furry Skype groups. In 2016, he started frequenting Telegram and Facebook Messenger more because recent Skype updates has slowed the program down significantly.

Khord Kitty was on the registration staff for FC 2010 and staff hospitality staff for BABScon 2016. He attended furmeets in Champaign, Illinois in 2011, and several in New York City from 2011-2015. He also attended New Jersey FurBQ in 2011.

On Independence Day 2014 he received, Khord Kitty, who was commissioned from Locado. The body of the suit was stolen on his trip home from AC 2017 on the Greyhound bus. His replacement bodysuit and head were lost in an unsecured container that fell out of the back of a pickup-truck and onto the road during a 100 mile journey. He has participated in 30 fursuit dance competitions, placed in 13 and won 7. He also founded the dance competition, Pacific Anthropomorphics Weekend.

Khord's fursona is a female, feral white Shorthair werecat created on June 20, 2009. The name "Khord" originates from the term "Chord", a musical term for pitches being played simultaneously, which is spelled with a "K" instead of a "C".

She has a black vertical stripe on her back, and heterochromic eyes with a blue left eye and a green right eye. Unlike most were- creatures, she can never turn back to her human form and takes an appearance contrasting traditional portrayals of were- creatures. The stripe is both symbolic of a black note on a piano and a tire mark referencing Khords backstory.

Khord Kitty was originally a male human named Chris. He was cursed when he ran over a cat during a drunken after-party drive. That unnamed cat had a karma spell which cursed him. The spell turned him into Khord Kitty. With no memory of her previous human form, Khord's personality is playful, curious, cheeky, and sly.