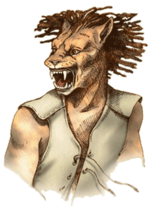 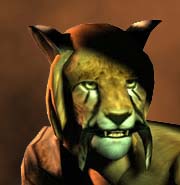 A khajiit protrait from The Elder Scrolls III: Morrowind

The khajiit are a race of feline-people from the Elder Scrolls action role-playing open world video game series. 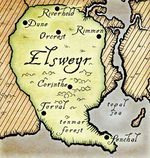 Khajiit originate from the province of Elsweyr, and vary greatly in appearance depending on which phases of the moons Masser and Secunda are present at birth.

All breeds of khajiit are typically very quick and agile, and some of them are also quite intelligent as well - this makes them naturally suited to the arts of thievery. They have a weakness for everything sweet (notably the drug known as skooma, which is distilled from a substance called moon-sugar), and are especially more prone to become drug-addicts compared to other races. Originally in Arena they looked just like an average man. In Daggerfall they took a more "cat like" appearance with some fur and a tail. Then in Morrowind they turned full anthro, but with permanently bent legs. In Oblivion they kept the anthro look, but removed the bent legs. Finally in Skyrim they took the khajiit's apperance as less lion-y and more like a house cat.