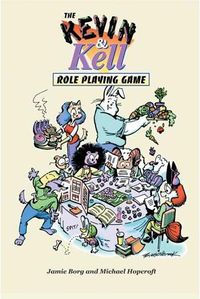 The Kevin and Kell Role-Playing Game is an American role-playing game based on the comedy furry webcomic Kevin and Kell created by Bill Holbrook. The game was published by ComStar Media in 2005. It was written by Jamie Borg and Michael Hopcroft, with illustrations by Holbrook.[1] There are two different versions of the Kevin and Kell RPG; a PDF version and a print version.[2][3]

The Kevin and Kell RPG is set in Domain, a city in an alternative world in which sapient birds (known as the "Great Bird Conspiracy") travelled back in time and gave intelligence to fauna after humans left the Earth. However, the birds failed to the remove predator-prey relationships in animals. As a result, the world they created is similar to the our world, except that there is a greater chance of being hunted down, killed and eaten.[4]

The main characters are Kevin and Kell Dewclaw, a couple in a mixed marriage. In Domain, mixed marriages are defined in terms of diet. Kevin is a herbivore (a rabbit) and Kell is a carnivore (a wolf). They have three children: Lindesfarne, a hedgehog adopted from Kevin's first marriage; Rudy, a wolf/fox hybrid born during Kell's first marriage; and Coney, a carnivorous rabbit.[5]

The main objective of the game is to avoid being hunted and eaten. It uses the "Action! System Core Rules",[2][3] which are related to the Fuzion system. In this system, the action resolution is attribute, plus skill, plus 3d6 verses difficulty. Character creation is limited point-based, with a pool of attribute points and a pool of character points.[6]

The game has generally had mixed reviews. The game is approved of Holbrook.[2][3] Wyrdmaster, the main reviewer for Gamewyrd gave the game seven out of ten marks, writing that, "It's pretty easy to summarise Kevin and Kell the RPG. Although this is not a jaw dropping game, it's safe to say that authors Jamie Borg and Michael Hopcroft have pulled it off. This is a good game. If you're a Kevin and Kell fan and into roleplaying then you'll like the game, if you're an Action! System fan then you've a good new setting or if you're looking for something furry then you're in luck. I think the weakest link might be those Kevin and Kell fans who needed a less thorough and more lightweight game to get them into roleplaying (but all the Kevin and Kell fans I know are roleplayers (and not everyone I know is a roleplayer!)) I think ComStar Games probably struck the right balance here."[7]