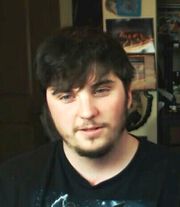 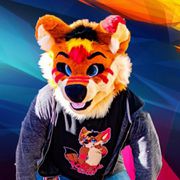 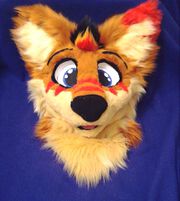 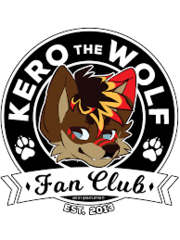 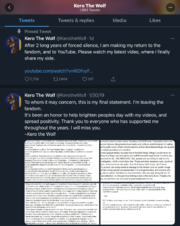 Kero leaving and returning to the fandom via his personal Twitter

Kero The Wolf, formerly known as thedogman2[1][2] (real name Joshua Hoffman)[citation needed], is a fursuiter and YouTuber who lives in Pittsburgh, Pennsylvania, USA.[3] He was primarily active in the furry community from 2012 to 2018, and from 2021 onwards.

Kero first joined the furry fandom sometime in 2012 after finding out about it from his former friend SnakeThing. Kero states that he saw a wallpaper featuring feral animals and this interested him. In the beginning, he mostly spent his time on Vine, Twitter, and Fur Affinity before creating a YouTube account on July 7, 2013. For the first few years of his time on YouTube, Kero mostly uploaded random furry-related videos and became somewhat well known in the furry YouTube landscape.

Sometime in 2017, a friend of Kero by the name of Ashley Zoe Fox talked to the popular YouTuber Shane Dawson, and convinced him to ask Kero to interview him about the furry fandom.[4] Shane later uploaded the video which was called WEIRD SIDE OF YOUTUBE: FURRIES on July 6, 2017.[5] Kero went from having 10,000 subscribers to 90,000 as a result of the video. He later hit 100,000 subscribers in early 2018.[6] During this time, Kero was seen as a widely respected individual in the fandom and would continue producing content for his channel regularly until September 2018.

In September 2018, leaks on Twitter began a major controversy surrounding Kero.[citation needed] Many accused him of zoophilia among other things.[citation needed] Kero would continue to upload some videos on his channel until November 2018. After several months of receiving hate and threats though, Kero left the furry fandom.[7]

Later on in 2019, however, he stated he would eventually return to YouTube to "clear his name" once the investigation was over. As of 2020, he remains to lay low but still interacts with his audience on Patreon, Fur Affinity, and YouTube.

On March 12, 2021, after nearly two years of dormancy, Kero uploaded a video to his YouTube channel, titled My Side,[citation needed] in which he explains all that happened within the past few years, trying to defend himself and denounce the accusations brought upon him. An example of this was when he brought up him potentially being arrested, in which he states that — while police did indeed show up to his house, even up to "several times a week" — they ultimately did not find him guilty on any counts, even after it being handled by, quote:

For some reason, Kero presents this as vindicating him, despite the best evidence suggesting that Kero got off by stonewalling the police, refusing to provide information, and ultimately being outside the statute of limitations. This action drew universal condemnation both within and outside of the fandom, among furs and non-furs, in both social media and furry art sites, with most pointing out the obvious lies and distortions and pointing people back to the evidence that condemns Kero.[citation needed]

Kero was known for making advice videos for other furries as well as doing vlogs and livestreams. He also did collabs with other well-known furry YouTubers and also had a thing for filming scenes of nature. He also did some logo animations early on in his YouTube career.

In September 2018, Telegram chat logs circulated online which appeared to show Kero discussing acts of bestiality[11] and necrophilia[12][13] with animals, and videos which are claimed to be Kero committing such acts.

Kero disputed the claims on the grounds that several of the features of those in the videos do not match Kero,[14] however, the user IDs of the Telegram chat logs appear to match those of Kero's real account, which include pictures of Kero in sexual situations with his dog, a dead fox supposedly found on the road[15], and that said videos were sent by him personally to SnakeThing[16]. Kero variously claimed that his account was hacked,[17] or that the logs were faked, though the latter is not technically possible since the logs have been forwarded through Telegram's own back-end server information. It is speculated that Kero used a proxy IP address via VPN to fake this screenshot.

On September 28, 2018, Kothorix uploaded a YouTube video claiming that he personally confronted Kero, with who he had previously conversed, about the veracity of the logs.[18] In the video, Kothorix claims that Kero admitted to him that the logs were real, and that "he does have an interest in some aspects of zoophilia."[18](timestamp 7:58) He went on to say the Kero denied engaging in any actual, physical animal sex acts, which directly conflicts with the now confirmed information in the chat logs.

Kero repeats this claim in a video interview with Ashley Zoe Fox, uploaded the same day,[19] saying, "I have never had sex with any animals." In this second video, Kero reiterates his assertion that his Telegram account was hacked, adding that he later lost control of the account due to this and that a previous screenshot he had posted of an account he still had access to was fake, "found on the Internet." He claimed the logs were only "five percent" true. He said that he had, in fact, joined a chat group for feral artwork, through which he befriended Nelizar/Snake-Thing, another individual implicated in the logs who was later arrested in real life and that he ultimately stopped speaking with this individual because he was made "uncomfortable". Despite the contradictions between Kothorix's video and Ashley's, Kero retweeted a link to Kothorix's video and called it accurate.[citation needed]

Along with other people[who?] identified in the chat logs, the evidence against Kero was submitted to the authorities. In a tweet thread posted on November 8, 2018, Kero revealed he was under police investigation,[20] stating that he is taking the situation seriously and apologizing for causing the furry fandom "trouble"[20]

On January 30, 2019, Kero put out a tweet after a two-month absence in which he stated that he's leaving the fandom, citing "toxic mindsets" and "witch hunts" against members of the community.[21]

Around June 2019, Kero sold his third fursuit to a fan of his by the name of Diamond Dwolf, who said they would wear it at Anthrocon 2019. It is unknown if they went through with their decision or not. The fate of his other two fursuits is currently unknown although it's likely Kero still possesses them.

During Anthrocon 2019, it was reported that Kero was in attendance, leading to speculation that the sale of his fursuit was a ruse so that Kero himself could walk around in it.[22] At that same convention, it was discovered that someone was going around wearing Kero's second fursuit.[23] On July 20, 2019, LordOcelet, a nonfurry who is friends with Kero in real-life uploaded a video that confirmed that it was him in Kero's fursuit. According to Ashley Zoe Fox who also attended the con, it was done as a "social experiment" to see if furries there would care or not.[24]

Speculations were[citation needed] made on if Kero will ever return to YouTube or not. Kero has mentioned multiple times in the past he wants to return to making videos on YouTube but states that he can't because he has to wait for the investigation to end. Despite this, it was revealed by Archive The Wolf that sometime around late 2018 and early 2019 the Pennsylvania State Police seized all of Kero's electronic devices after getting a warrant. About 30 devices were taken.[25] Because of this, Kero hasn't been able to make any videos since November 2018.