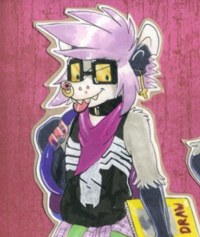 Kenner, art by themselves

Kenner, also known as Tegan, Kessh and TinyTrashYeen, is a furry artist and proffesional illustrator from the Philadelphia metro area who lives in Delaware, USA. They are married to fellow artist Reaux.

Kenner had been a member of the furry fandom since the end of 2003, but did not take an active part in the fandom until 2004 when introduced by Crazy2287 to the online art gallery known as DeviantArt. They joined the furry community with a red fox/Tarantula Hawk Wasp hybrid character named Pandora Stone, or Pandy for short.

Kenner commissioned a Pandy fursuit from OMGPineapples in 2012. The suit was modified into a plain red fox and sold to Sidkah in 2015. Kenner still retains the character rights for Pandy. OMGPineapples also created a Spiral fursuit in 2014, which was sold to Shadii in 2020.

Kenner's style is strongly influenced by that of Korean American comic book artist and writer Jim Lee and other comic artists. Their preferred tools of the trade are Prismacolor markers and Faber-Castell pens. They are a freelance artist by trade and regularly take commissions both within and outside the furry fandom.

Commissioned work outside the fandom includes wildlife artwork and pet portraits. Outside of traditional artwork, Kenner paints wargaming miniatures as both a hobby and on commission.

Kenner has an interest in herpetology and entomology. They have owned a large number of insects, arachnids, reptiles, and amphibians. They enjoy collecting merchandise from 20th Century Fox's Aliens and other horror movies, as well as old toys and collectibles.

Kenner owns a Cavalier King Charles Spaniel and is an enthusiast of the breed. They play Warhammer competitively.