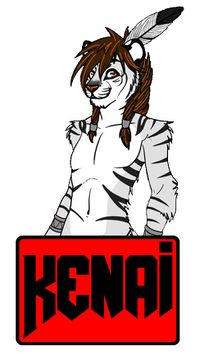 Kenai Tiger (born March 22, 1987), is a male furry art collector who lives in Newcastle upon Tyne, Tyne and Wear, England.[1]

His fursona is a white tiger.[1]

Kenai was born in a small tribal village. As a small cub, he used to be isolated from the other cubs of the tribe, but he learned the value of friendship when he met a human and, over the next 20 years, they became the best of friends.

During his teenage years, Kenai found out he was attracted to males more than females, but in his early 20s he met a female who made him happy, and they settled down and had cubs of their own. When Kenai was in his mid 20s, the relationship fell apart and he left the home, but he still sees his cubs when he can.

Kenai creates videos, which he hosts on YouTube. In the videos, he plays through a variety of computer games, including Minecraft, Doom 3, and Half-Life.

As it turns out, Kenai loves games that much he decided to get his name into Prison Architect so keep an eye out for him.

As the job market in the UK is terrible Kenai needed to find work, but he also wanted to run his own company, with his background being computers and gaming he decided to open a company offering high quality computers for all users and this theory is based on what he would be happy installing into his own computer.

He struggled with a name until he realized that his name on the systems would be the seller and he settled with KT-Tek and he has commissioned the artist Yourtime to design the logo.