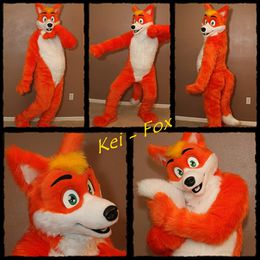 Kei's personal beliefs are a mix of devout Christianity espoused with Buddhist principles, combined with a practical approach to politics. He is employed as a Certified Nurse Assistant at a developmentally disabled adult daycare.

In June 2018, Kei was diagnosed with Hodgkin's lymphoma.

As a child, Kei displayed a fondness for animals, subscribing to children's magazines such as Ranger Rick and Big Backyard. He also had a fondness for Disney's Bambi and Robin Hood, among other anthropomorphic animated films. In his secondary school years, he began to draw furry characters of a variety of species and background stories.

Kei's awakening to the furry fandom occurred in 1993, with the release of Nintendo's Star Fox franchise. A few years later, he discovered anthropomorphic comics such as Wild Life and Furrlough, both initially published by Antarctic Press.

Kei's first fursona incarnation was originally a Redwall fan-character, portrayed as a Scottish fox-knight. As Kei participated more in the furry fandom, his fursona was developed into a general all-purpose character, depending on the genre and circumstances.

His fursona has a babyfur version (though he maintains a strictly clean portrayal), and portrayals in various genres including Nickelodeon's T.U.F.F. Puppy, as illustrated by his friend Shinragod. His trademark attire is a Wallace clan Scottish kilt, though he is often portrayed as a cosplayer.

Kei purchased a full fursuit of his fursona in 2010. Manufactured by DTWA, it debuted at Antheria. Since then, Kei has been an active participant in many local furry events, including the monthly Prancing Skiltaire social, and the annual Irvine Regional Park Fur-B-Q.