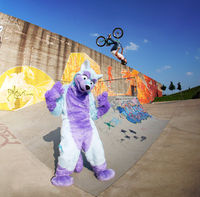 This is Keenora's fursuit, made by Arend Studios

Keenora, also known as Keenora Fluffball, (born March 9, 1986)[1] is a fursuiter who lives in Rhede, North Rhine-Westphalia, Germany.[1] Keenora is engaged to Codydawg[2] and they have been in a relationship since 2007.[3]

His fursona is a male Thundra-Wolf with blue and purple fur and turquoise stripes on his back, his tail, his face and his wrists. He created his fursona back in the mid 90s. In the year 1996 he developed his character to its actual design, including the position of every stripe and the colour codes of his fur. His fursonas character is a mix out of cute and cool.

His fursuits, depicting his fursona were built by several fursuit makers. Starting with normal Fursuit-Outings in the beginning, he soon tried to give himself a bit more innovativeness through performing extreme things in his fursuit like aerobatics, bungee-jumping and skydiving. He also visits other unusual places for fursuiting like big concerts[4] or staying in his fursuit for long trips like a full day trip from Cologne to London, including the plane flights [5] as well as day hikes through metropoles like Tokyo for 33 km [6].

In the year 2012 he began to start his series of videos, called KeeXtreme. The first two videos were made by BigBlueFox showing Keenora doing the first Bungee Jump in a fursuit as well as the first Skydive in a fursuit. These videos were followed by videos made by himself. With these videos he tried to show what is possible with a fursuit.

Trivia: For his Skydive he built a C#.NET Application to calculate the pressure and forces which will be present during a freefall from 4000m in fursuit.

In the year 2014, he began to organize extreme fursuit events. Starting with the Fursuit Bungee Weekend on the 13. July 2014, where 9 fursuiters gathered for doing a bungee jump together. These 9 fursuiters came from different locations all over Europe and came over only for that event. In 2016 he organized the follow up Fursuit Bungee Weekend 2 which was called FBW2[9] where 17 fursuiters jumped out of 100 meter. That event was filmed by the public TV Station RTL West[10]. 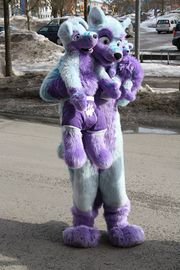 Keenora carrying two of his plushies

Since 2010 he is part of different TV series and documentations, delving into the topic Furry and Fursuiting. In 2011 he was part of the swedish series Outsiders[11], which was showing different Furries from Sweden, Germany and the Netherlands and got aired on Kanal 5. In 2012 he was the main figure of the German TV series Focus TV, Faszination Leben[11] of the channel RTL. From the year 2012 till 2015 he was part of different short documentations on the channel WDR. He was also interviewed on the channels MDR[11], NRWVision[11] and DW-TV[11]. At the end of 2018 he got interviewed by a Spanish TV Show, moderated by Samanta Villar, which is called Samanta Extravagancia[12]

He got interviewed by a graduate for ethnology in 2014 and was part of the master-degree publication Furries in Deutschland – Eine Szene-Ethnografie.

He wrote a guest article on the outdoor experience Blog lebegeil.de[16] in 2016.

He had an appearance in the 2016 Version of Matt Harding's "Where the Heck is Matt?"