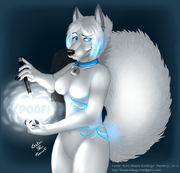 Kaze's fursona is a folfsky (a hybrid of arctic wolf, arctic fox, and husky). Kaze has white fur with light blue streaks in her headfur, light blue eyeshadow, grey rims around her ears which are pierced with silver cuff earrings, and a light blue spiraling tattoo that goes down her torso front to the mid-bottom of her back. Kaze also has a very long, poofy tail that fades from grey (close to the end of her tail) to black at the tip of her tail. Kaze is never seen without her light blue collar with a round silver tag attached to it that says "Kaze" in Japanese kanji.[2]

Kaze was a guest co-host on the popular furry music podcast show, Friday Night Tech (now known as Friday Night Tracks[3]), from 2008 - 2012, often creating the show's season logos as well as talking on the show.