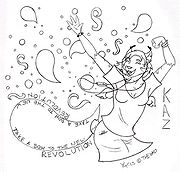 Kaz (born 1986) is a furry artist who lives in Canada. She is an Archaeology major at the University of Saskatchewan. She has lived all over Canada, but as of 2006 resides in Saskatoon, Saskatchewan.

Kaz discovered the fandom in 2003, when she joined Fur Future, a futuristic, story style role-play based on the Redwall series by Brian Jacques. She began drawing her role-playing character, and later, as she began to explore the furry fandom, her own fursona and the fursonas or characters of her friends. She also dabbled a little in writing furry stories, but most of them were never finished or posted. She met some of her furry friends when she first joined deviantArt, and still keeps in contact with them. 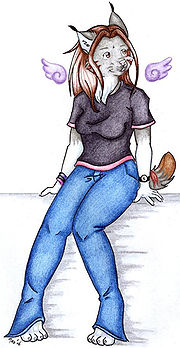 Kaz’s fursona is a grey-and-red-furred Newfoundland lynx. Her hair, eyes, body shape and clothes are all based on her real-life appearance. She typically wears old jeans, a plain t-shirt, and a plaid flannel shirt with the sleeves rolled up. She hardly ever wears shoes, preferring to go barefoot or in socks. One of her distinguishing features is a pair of small, lavender-colored anime wings that aren’t actually attached to her body, but rather float a few inches behind her. These wings serve no function whatsoever, and are simply there “to look cute.”

Kaz doesn’t consider herself an artist per se; drawing is something she does to relax and to pass the time. She first started drawing in 2003, and from then on started a long trial-and-error process. Her style carries influences from anime and from various furry artists whose art and tutorials she used (and is still using) to learn how to draw. The majority of her art consists of furry characters, though the odd human or fantasy-creature might occasionally pop up.

Her preferred mediums are 4H or 2H sketch pencils, mechanical pencils, Micron ink, Prismacolor colored pencils and Faber-Castell watercolor pencils on plain printer paper. She is planning to experiment with colored pencils on cardstock and Bristol sometime in the future.

Online, Kaz spends much of her time on the furry chat YiffChat (she prefers the more community-like atmosphere of YC, rather than the large chats like IRC and Yahoo) and is a member of a few furry forums. She’s always up for a chat, so if you spy her in YC or on instant messengers feel free to strike up a conversation.

Offline, she enjoys her university classes, going to bars and pubs for concerts, dancing, writing short stories and poetry (most never get finished), sewing and knitting, skating, watching hockey games, and jogging. She likes watching sci-fi, action and thriller movies from the 60’s, 70’s and 80’s, and listening to jazz, classic rock, classical music, and local Canadian bands.