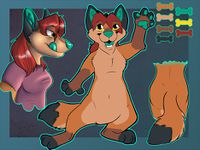 Kayote has always had a fascination with anthropomorphic animals, and she has been drawing them since the age of five. Her art has been featured on the Furry Fiesta website, as well as their conbook. She also has had her art published on Sledzz, a husky simulator site.

Kayote went through several fursonas before settling on a hybrid of coyote, griffin and kangaroo with large, feathery ears and trademark aqua-blue beak, paw pads, flesh and nose.