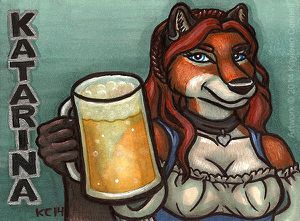 A conbadge of Katarina from 2014

Katarina, also known as Katarina42 (real name Kayleen Connell; born March 31, 1978), is a female artist. Although she was raised in Wisconsin, as a military wife she has lived in many places including Texas, Nebraska, Massachusetts, and Virginia. As of February 2018, she lives in Ohio She received her BFA degree in 2000.

Katarina is the former co-creator and administrator of the LiveJournal community Fantards.[1]

Katarina uses a variety of media, including ink, pencil, colored pencil, marker, mixed media, watercolor, and digital. Her style is a detailed blend of cartoon and realism. Her art frequently features medieval themes and corsets.

A self-described "gallery whore", her artwork is featured on many different sites.

Her artwork was published in the 2005 Laced! corset portfolio.

Her artwork also appears in "Furries: A Documentary." (http://www.furryfilm.com/)