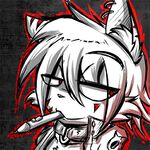 Katsuke's fursona is a gray feline with red stripes on his body, white hair, and red eyes. Usually seen with two gold piercings on his left ear and a black collar with a gold ring. His fursona used to have an alter-ego, which was a crow, with the same colors as his feline self, and is referred to as Krow, still having feline ears. Another form of his fursona which is also his current fursuit he frequents conventions in is a Crux_(species). Katsuke has many other forms in various species which he draws himself as whenever he chooses, however he prefers to be mostly feline.

Katsuke was an digital animation student, working on 3D and 2D Animations. His art is mostly colored digitally.

Katsuke's artworks usually feature his own characters, often from a fictional military team he calls Team Wildcatz, which is said to be based off a planned novel or webcomic he was supposedly working on.