Kat-Venture (Short for "Meerkat Adventure") is a graphic novel series created by British cartoonist Mark Alexander Smith.[1] The books are based around the exploits of an anthropomorphic meerkat named Magnus who escapes from a zoo in Scotland to pursue a career in archaeology. Kat-Venture takes place in the present day in the real world with humans, except where the animals have a society of their own that the humans do not seem to be aware of.

The first book, Kat-Venture and the Terror of Xibalba, was put together in 2015 when Smith wanted to create a series of standalone comics with a meerkat as the main protagonist.[2] During the early stages of writing the book he enlisted the help of David Whamond, a friend he met while at the university, to help with writing the story. The following year it was followed by Kat-Venture and the Mountain of Death, the first book in the series to be illustrated in colour rather than in greyscale.[3] It is the only book in the series in which Whamond assisted in colouring in some of the pages, though the majority was still done by Smith.

Whamond passed away suddenly during the writing of the third installment, Kat-Venture and the Pursuit of the Elements.[4] Smith decided to carry on with the project, with assistance from fellow writer Steve Alford to help finish the story. Alford had previously formatted the first two books in the series. David Whamond was posthumously credited on the book.[4] The original books went out of print in 2020.

In 2018 Smith began work on a short story prequel titled The Danger of the Deep featuring the supporting character Jules in his first expedition. The project was soon shelved due to time constraints, but was picked up again in 2020. It has since been completed and released exclusively on FreyFox's Patreon account, and later as part of the Kat-Venture Anthology compilation. 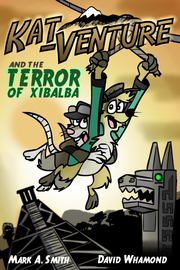 The cover to the first book in the series, Kat-Venture and the Terror of Xibalba