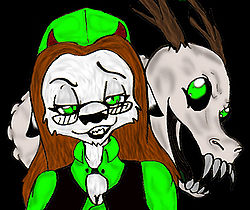 KashaPaw is a New England furry artist who lives in Rhode Island, U.S.A. He specializes in monsters, usually creating artwork that involves gore or vorarephilia.

Kasha's personal fursona is an arctic wolf/thylacine hybrid with white fur, brown eyes, and brown thylacine stripes on his lower back. He also has a female character represented by a similar 'sona and an extremely long and lanky monster species of his own creation, as well as a windigo named 'Chicken.'

He is a childfree Atheist and a frequent attendee of FurFright, a Connecticut furry convention.

He also occasionally does horror movie reviews on ThatGuyWiththeGlasses.com