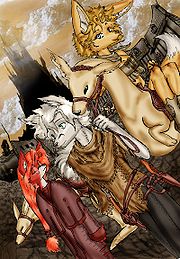 The Shulamite is a furry fantasy novel written in 2005 and available through CafePress since 2006. The book was written by Joshua Knode and illustrated by Jodimest and Tom "the Tomcat" Adams. It is the first book in the "Kapar Saga," detailing a fantasy world dominated by Kaparjutsu, the art of the gun.

The Shulamite was originally intended to be a comic book, but the author was worried that the storyline was too complex and contained too much adult material to be told as a graphic novel. The illustrations by Tom Adams are simple ink and pencil drawings, with one illustration by Jodimest, artist of Jewel Vixens. Joshua Knode admits a few illustrations that were created before the book was completed influenced the path of the story. The book is available only online, though Joshua states he will make some availible at conventions. The book is included on the 2005 Ursa Major Awards' Recommended Reading List.

The story follows Magnus Mangreer, a young arctic fox practitioner of the art of Kaparjutsu, the sacred art of the gun, as he travels back to his home city of Cratecentra after training at the Medina School of Kaparjutsu. His teacher, T'shelle, an older yet still-talented Red Fox and Master of the Art accompanies him, as she is on a pilgramage to the legendary Temple of Errarat. On their journey, a secretive group of cat sorcerers send assassins after T'shelle and her companions, fellow Kapar Master Jugai and the avian Shaman Exile. Upon his return to Cratecentra, Mangreer finds that his entire family line and personal history had been completely erased by a mysterious force, and those who remain are closed-mouthed about who or what could erase his entire family from existence. The book concludes with a war between gunfighters and magic users, with Mangreer finally learning the mysteries of his past. 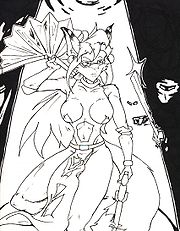 Kaparjutsu is a fictional martial art developed by Joshua the Samurai and Fox Champion for the Kapar Saga. More accurately a system of several arts, Kaparjutsu focuses on the drawing, aiming, and reloading of the handgun. Joshua states the art was based on the theory that in a distant future using the gun will have become as much an art as the use of the sword.

The practitioners of the art are often called "Gunslingers" or "Kapar Users". Individuals adept in the art can hit distant targets without using their eyes, draw and fire impossibly fast and re-load their Kapar with a single practiced motion. Many Gunslingers also excel at separate arts of hand-to-hand combat making Gunslingers almost unbeatable opponents. The art is regulated by "The League Of Kapar Duelists" who lays down rules of training, holds tournaments, and generally maintain the integrity of the art.

Creator Joshua Knode has stated that he plans to use actual techniques developed for Kaparjutsu at the Morphicon Atomic Battle of Doom, a foam gun shootout planned to be held at the end of the con.

Cloe, a Kapar with trigger guard removed to make drawing faster. Owned by Exile of Granaal.

The revolvers used in the art of Kaparjutsu are extremely specialized weapons, forged over a period of four years, corresponding with the first four years of a Gunslinger's training. The kapar is larger and heavier than a traditional firearm, but balanced enough so that the weight is hardly noticeable. Their weight, craftsmanship and high caliber make Kapars some of the most accurate handguns on Venus by far. They are named and personalized with complex engraving by their owner. If a Kapar is destroyed, they are given a funeral like real people.

Javear, a Kapar with a bayonet. Used by the Assassin Lupenya.

Some races consider the Kapar a living thing and has a soul. In The Shulamite a group of White magic-users used a resurrection spell to re-construct a Kapar that had been destroyed. Some Kapar feature long blades or spikes to make them useful in melee combat or to prevent opponents from grabbing the weapon in close combat. Some more exotic forms of Kapars feature sword-like blades, or even heavy metal butts so they can be used as a club.

Occasionally gunslingers employ a pair of Kapar, one in each hand. One is usually smaller than the other and sometimes kept concealed to convince an enemy they're disarmed when their not. Occasionally Kapars are long enough to be considered rifles, but this is controversial and some don't consider "Long Kapars" Kapars at all. A Kapar will hold anywhere from two shots, to eight shots in a cylinder. The most common is six shots, though many prefer a four-shot because of lighter weight.

Aiming and firing in Kaparjutsu is unlike aiming in other firearms discipline. Kapar have no sights, and are designed to be aimed from any arm position, right or left handed. Kapar can aim by listening to a target - some species can even sniff them out. By memorizing possible trajectories, Gunslingers can appear to dodge bullets (Joshua notes that in actuality, gunslingers aren't dodging bullets as much as they are predicting where they will end up and moving accordingly). Some employ metal plates on their wrists nicknamed "Reflector Plates" that can deflect bullets away from them in moments of desperation, though this is considered a last-resort tactic. Reflection can also be done by the Kapar itself, or by iron fans some gunslingers use for Melee.

The art is similar to other fictional gun combat styles, including the popular sensationalized Hollywood style Gun fu seen in many action movies today. One form is known as Gun Kata was conceived by writer/director Kurt Wimmer and choreographer Jim Vickers for use in films such as Equilibrium and Ultraviolet. While both Kaparjutsu and Gun Kata involve memorization of possible trajectories for dodging and aiming as well as close-range melee, Kaparjutsu focuses less on melee concepts.