From WikiFur, the furry encyclopedia.
(Redirected from Kanye West)
Jump to: navigation, search 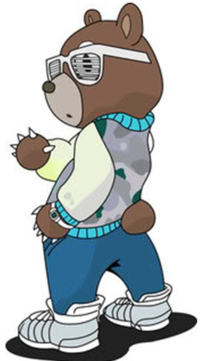 Dropout Bear first appeared on Kanye's debut album The College Dropout and soon became his trademark as it received a large amount of positive public response. The original bear was just a college mascot but soon transformed into a smaller but still anthropomorphic bear that represented Kanye, and is featured on the cover of Late Registration. Dropout Bear transformed into an animated character on the album cover of Graduation And its last official appearance was 808s And Heartbreaks where it was a 3-D Computer Animated Character. On Graduation he was a fully animated character as he was in the 2008 music video Good Morning. Released on August 25, 2008. Soon the animated bear became the official brand logo on clothes in Kanye West's online store. Dropout Bear has also become the mascot for Kanye West appeared in MTV's dances of the summer article threw out 2007-2008. However, Dropout Bear did not appear on West's next album My Beautiful Dark Twisted Fantasy, or any of his subsequent albums.

Dropout Bear comes back after 10 years as an animated character in the KSG animated series with Kid Cudi's mascot Kid Fox. Whilst not much is known about the series, all we know is that it is inspired by 808 And Heartbreaks. We will know more when it will come out soon as said by the trailer[2].