Kanati is a character in Extinctioners, and made his first appearance in issue 13. 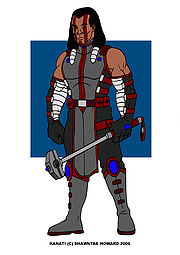 Kanati is a Hunter with the training of a military solider, out door tracker and tactics, and animal capture. A full blooded Cherokee, a rarity on Earth of his time, He has little concern for the traditions of his people, looking more towards ways of bettering his own social and financial status. He joined the Earth Advance Scout Team because he felt his animal tracking and trapping skills could be of use, as well as the obvious opportunity to be one of the few people who would get the chance to leave the dying polluted Earth for a promising new world.

Kanati possesses considerable strength from constant weight training and physical activities. He does have experience with humaniod animals, but none that are as evolutionarily advanced as as the humanimals of Alden.

He was a member for the Keeper team of humans sent as oversees of the terraforming and construction project of the planet Alden, but an accident to his suspended life support chamber caused him and his crew mates to remain extended stasis for well over 1000 years longer than they should have. Due to prolonged exposure to the chambers, the occupants developed a type of pod poison where exposure to clean oxygen caused a lethal allergic reaction. Dr. Burden, the only human that managed to survive the inital awakening developed a treatment on the few survivors that strengthened their immune systems, allowing them to cope with their new, less polluted, environment. However, the threatment did have interesting side effects.