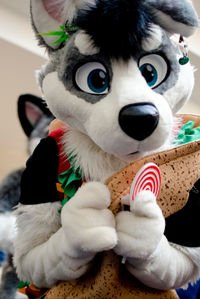 Kamillex is a fursuiter and DJ who lives in Boston, Massachusetts, USA.[1] His fursona is a grey and white husky.[1]

Kamillex's fursuit was created by Phoenix Wolf Suits and was received on April 20, 2013.