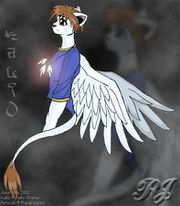 Kalio the Winged Cat by Kinari

Kalio, also known as Kalio Thalius on Furcadia and Kalio Duport on Second Life, is a pure white furred and blue-eyed house cat with brown hair, white feathered wings, and is often seen wearing a string necklace with attached feathers. He is an alternative character originally created by Jaybird to use on Furcadia starting in late 2001. At that time avian characters were not freely available on Furcadia for use, so this new feline character was created as a result of the limited species selection at the time. On Furcadia he is most widely recognized for his appearance and contributions as a help staff beekin to Furcadia, where he served as an appointed head of the Help Desk from 2002 to 2004 and was a participating member of the Furcadia beekin council. He also contributed to other beekin groups such as the Help Channel and conducted online beekin training classes as part of the Teachers group. This character was also used in limited fantasy role play on Furcadia, Second Life, and MU* worlds such as K'raii MUCK, for which he was a server administrator wizard.

The alias Kalio is also commonly used by his creator for all social online aspects not necessarily related to the furry community. On rare occasions this character still makes appearances on Furcadia and is used as an alternative identity on IRC.