Kaji Aldewolf, born May 10th, 1989, is a furry artist from Damascus, Oregon. His fursona is a dragon/wolf hybrid known as a draolf. He shares many traits with his fursona, mainly the likeness of dark colors and the main colors being gray and black for the colors of his clothes. He also has the loyalty of a wolf and a dragon combined when it comes to with his friends. With being a draolf, he has what some people would call an obsession with wolves and dragons, more in the dragon section than the wolf. Kaji's art can be found on Fur Affinity and Deviantart. He is a digital artist, and a traditional artist, trading between the two of them.

Kaji also can be found on many roleplays. Some of them being GaiaOnline, Pernworld, Soucon, and Tena Maisha. He used to roleplay on Meadows MUCK, Kings and Vagabonds MUCK, and Bleaker MUCK.

The lions that he had on Kings and Vagabonds were Kijani and Chioh. Chioh is the king of Palandasya, though he has been driven from his land by the Blood Brothers, where his other lion by the name of Kijani is the co ruler of it with his now completely blind brother Harimu. On Tena Maisha he plays Masiri, a meerkat; Chioh, the King of Uduak; and Kijani, a rouge lion.

Kaji is also known by the same name on Mu*s such as Marvel Muck, where he is a dragon shifter. He is known as Ka'j on Soucon, and on Pernworld he is known as K'tai and T'lin. On Whispers of the Galaxy, he is known as Raikou and he is one of the Archwizards on that Muck.

Kaji Aldewolf, last name changed from wanting to get out of the cliches found in the fandom, used to be a lightning dragon that could shift into many animals. But recently he has gone from a lightning dragon to a draolf, a dragon wolf, through a self realization that he had gone through with one of his closest friends. Though most of his friends are still dragons, and most of them are gainers or some sort of member of other furry groups, he is still a great friend to all of them. Some of them are Zero Whitefang, Dalaraga, and others. 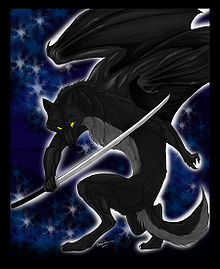 While he has the main body of a wolf; he has the wings of a dragon, this hybrid is unique in most ways though not in some. He stands at a height of 6'4' and he weighs in at a modest 166 lbs. Starting from the tip of his ears, his fur is a pitch black, save for the slight pink inside his ears and the vibrant hazel of his eyes. The fur on him is slightly shaggy as if he's caught in-between the shift from his summer coat to his winter coat. The teeth hidden beneath the fur are as sharp as ever and are wolven in shape and style.

His torso is softly muscled, while it is well defined; the furs itself softens the view to make it look like more softer look to him. All the way from the pecs to the abs, Kaji is well formed; but he fur covers it. Though it does show when the fur is matted down. Going from his neck all the way down over his groin to the tip of his tail is a shade of gray that is a nice contrast to the black. His arms are well built; their tone coming from the dragon half of him and from the random physical activity he puts himself into. Compacting the muscle to be more effective.

His wings are 12'10' in length from tip to tip. These wings have no special markings on it nor do they have any spikes where the wing fingers end. They are just wings, but the membrane is as flexible as silk, yet as tough as steel. His maximum wingspan is 15' and his minimum wingspan that allows him to fly is 88, though thats for only short distances before he has to go back to his full wingspan or fall. The wing scales are pitch black to match his fur and the scales meld seamlessly into the fur. The membrane is pitch black as well, to allow him to blend into the night sky.

His lower body is the same as his upper body, well defined and muscular, but not overly as he still needs the speed for fighting. His tail is still considered a bit more tame than other wolves would be, though it still has some body to it. Lazily swinging behind him, it almost touches the ground when it is just hanging there.

The clothes that he wears are fitted for him to relax in, he doesn't do much else than that to be honest. Cargo shorts that hang down close to his knees or past them are baggy enough on him to have him wear a belt. A vest that's loose on him as well, two metal clasps under his wings to hold it onto his body when he is moving around. Not much else on him besides those two pieces of clothing. There isn't much left to the imagination when you're only wearing two things.

Kaji is on Fur Affinity, and he is also on Deviant Art. Kaji is bisexual and he is single, but isn't really looking at the moment. His interests are rather varied. Get to know him and he'll tell you more.

He's been to Further Confusion'08 as the Writer's Workshop Lead, and he is also the same position for FC'09.