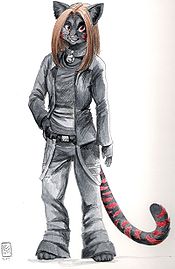 Kaji is a domestic cat furry who lives in Surrey, British Columbia, Canada. 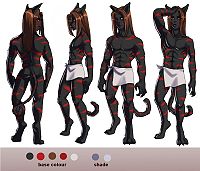 Kaji is 6'4" and weighs around 125 lbs. He has a slender, slightly toned body, and red eyes. His fur is short and black, with blood or ruby-red stripes all over his body. There are two stripes located on each cheek, three on each ear, and seven along his tail.

Kaji's hair is dark brown. The bangs range in length from the eyes to the chin, while in the back it reaches down to his hips. He wears a plain black collar with his name engraved on it, and attached to the collar is a simple anime-styled bell. The clothing he wears is usually a simple gothic style, with chains or other metallic pieces. He dresses very stylishly with dress shirts. 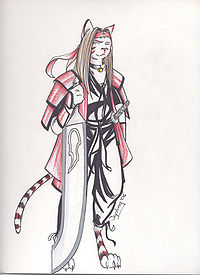 "Feudal Kaji" is one of Kaji's original characters, created for "Elements", a comic he is working on.

Feudal Kaji is whats known as a Hanya (Half Breed). He is normally seen as a human with ears and a tail of a cat, but when he transforms with his elemental powers he has the same looks as his creator, except with slightly larger build and longer hair. His class is the samurai, born from parents he never knew, and raised in a rich city.

Feudal Kaji's personality is not that of his creator. He is a little bit more silent, he argues a lot, and is a bit cocky. He is not usually the one to fight back unless he knows it is a challenge. If so, then he is ready for anything. His element is fire and wields a katana. Once he draws in his power and transforms, so does his weapon, growing to twice its size.

Kaji is a huge fan of anime and attends Anime Evolution, the local anime convention in Vancouver. His favorite animes include Wolf's Rain, Elfen Lied, The Twelve Kingdoms and many others.

Kaji loves anything that is Japanese, especially sake, sushi, and samurai. He loves reading webcomics and playing video games, preferring RPGs and Playstation 3 titles more than the others. He loves techno, trance, rave and dance music, and attends raves and dances. He loves to make new friends and meet new people. Preferring summer, Kaji really hates the cold weather and the winter season. He is not a big fan of swimming and hates to get wet.

Kaji's first furry convention was Further Confusion 2007. Others he has been to are Howloween, RainFurrest and the BC FurBQ.