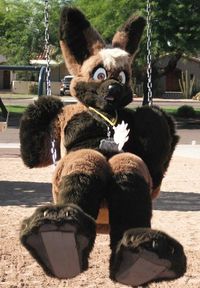 KahluaFennec, previously known as DoomedFennec (born January 26, 1988), is a fursuiter who lives in Chandler, Arizona, U.S.A.

Kahlua's fursona is a coffee-colored fennec fox. She has regular brown fur, with dark brown on the tips of her ears, face, paws, the tip of her tail, and stomach. The fluff on top of her head is a vanilla or tan-ish color. 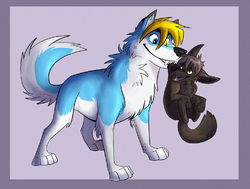 Spike and Kahlua - Art by Rileyy on FA

Kahlua has been part of the fandom since 2001, but did not participate in the community until 2008-2009. She is a calendar mod of the Azfurs.com website, where Arizona furries can communicate and join in on special events or meetups.

Kahlua is mated to a husky fur named Spike Husky.

Kahlua's fursuit was built by Syber from Made Fur You in the Summer of 2009. It debuted at Further Confusion 2010.