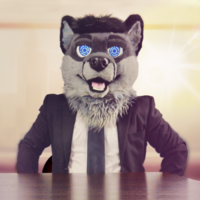 Kabba as seen on his YouTube series, "Kabba Blah Blah" 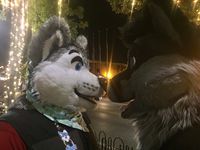 Kabba and Cobalt together at Pensacola's Gallery Night, December 16, 2016

Kabba enjoys video games, photography, and attending furry conventions. Kabba met Cobalt T. Husky in April 2013 and the two began a romantic relationship, eventually marrying in May 2016. Both Kabba and Cobalt's fursuits were made by Nevask. 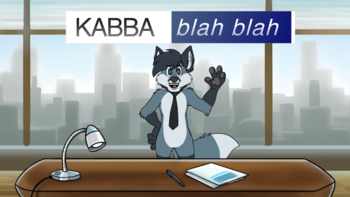 Kabba became known in the Florida Panhandle for his work on the regional furry group AnthroHUB', where he served as founder and spokesperson.[1] He co-founded the regional social group Open Coast[2] and created the Telegram bot "Emerald Helper Bot", which serves as an interactive guide to local events, chats and people.[3]

He is also the founder and chairman of Emerald's Fur Summit, a convention held annually in Pensacola, Florida, USA[4]. He is also the host of the Kabba Blah Blah video series on YouTube.[5]

Kabba's fursona is a Black fox.

Kabba founded AnthroHUB on December 30, 2015. AnthroHUB was a local furry group based in Pensacola, Florida, USA.[1] AnthroHUB later absorbed Panhandle Furs.[6] In October 2016, Kabba announced he would be stepping down from his role as administrator and spokesperson of AnthroHUB to pursue other projects.[7]

Kabba launched Open Coast Assembly, a monthly gaming (tabletop, console and PC) and fursuiting event, for which he is currently the lead administrator.

Kabba founded the convention in 2017 as Emerald Fur Con, having earned credibility with the local fandom through running successful events[9][10] and fostering a more open, active and engaged community[2][3].

Kabba, who was aware of the furry convention "dead zone" within the 250-mile (402.3 kilometers) radius of Pensacola[11], intended to launch the project once the local community was energized, hoping to garner their essential support for his fledgling convention. Unlike established conventions, Emerald Fur Con took place in a single day and was self-financed by Kabba who offered it to the public at no cost to them.[4]

In June of 2018, Kabba launched the first episode of "Kabba Blah Blah", a YouTube series that analyzes conventional knowledge about aspects of the furry fandom.[5]The show’s intent is to drive conversations within the Furry Fandom community about the topics covered on the show.

The process of producing an episode begins with Kabba picking a topic he considers to be important or meaningful, then researching the topic to determine if there is a story that needs to be told.

The premiere episode tackled the conversation about the price of commission-based art in the furry fandom.[15] The episode was well received and was featured on Furry Amino's front page on July 8, 2018.[16]

The show has featured original artwork by Creative Crystal[17] and original music by Breezier the Otter.[18]