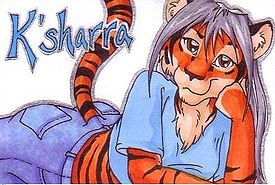 K'sharra's self-depiction of her furry persona

K'sharra (born 1982) is a furry artist who has been in the fandom since 1998. Her real-life last name has changed twice due to marriage and divorce, so her art is sometimes featured under different names, or simply under her furry name. She started in the furry fandom by doing simple artwork for friends, but quickly developed into more of an adult style. She has been a contributing artist for PlayMouse, HotFurs and BondoFox. Her artwork is primarily marker and digital work, but has also included sculpted furry character pendants and Second Life avatars (no longer available). She also runs her own Cafepress store[1].

K'sharra lives in Chicago, Illinois, USA. Some of the furry conventions she has attended include Anthrocon, Midwest FurFest, All Fur Fun, Mephit Furmeet, RainFurrest, Further Confusion, and Oklacon. She was the conbook lead for RainFurrest 2007 and lead admin for FurBuy until 2008. She also regularly does art panels at Rainfurrest.

As a character, K'sharra is a female orange tigress with silver hair and sharp spiky bangs. She occasionally frequents FurryMUCK, and is commonly featured as a subject of the artist's work. She owns a character in Second Life (Ksharra Manimal) but the account is no longer in use and the character has not been seen online in several years.

In April 2007, there was some controversy involving questionable bids on K'sharra's artwork by her at-the-time mate, Jurann, at All Fur Fun and on FurBid-SF. After All Fur Fun, K'sharra made a public post to the Artists Beware LiveJournal community stating "I have since talked to Jurann and made it clear that I do not condone price inflation."[2]

In a LiveJournal post, Jurann clarified that "Two of the pieces [on auction at AFF] in particular I liked and wanted to add to my collection ... and proceeded to bid on ONLY the two pieces I was personally interested in."[3] He also later claimed that he only wanted to see them displayed in a larger art show as NFS, not re-sold. The attempt to resell the piece online was due in large part to a confusion of which pieces had and had not sold at the AFF auction, as Jurann explained in his LiveJournal: "I didn't make the ownership and intentions of what to do with the pieces I won at AFF clear to K'sharra. I would also point out that AFF did not give K'sharra any paperwork to explain which pieces sold and did not and for how much."[3]

The convention staff have stated that they will "amend our policies for next year to discourage this as much as possible"[4] but no action has been taken against either parties, as the con "had not said anything about [shill-bidding regulations] in our Art Show policies".[4] In regards to the incident on FurBid-SF, K'sharra's "account will be monitored, but she is not facing any direct disciplinary actions."[5] K'sharra is currently no longer mated to Jurann, and the pieces questionably bid upon by Jurann remain in his ownership as rightful purchases.