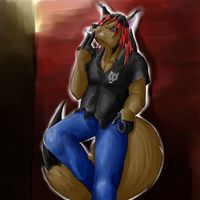 Jynx Darkwulf (born June 17, 1991)[1] is a furry writer and occasional artist. His fursona is a light brown wolf with a touch of lynx.

Jynx's previous fursona was Jynx Darkitten, a white-furred house cat with red stripes underneath his eyes like scars. He also had a fox-like tail with a black tip and one wing that changes between black and white depending on his mood.

While he still sometimes uses this feline fursona, the newer wolf/lynx is his main one. The lynx part of his new fursona reflects a desire to retain a small aspect of his previous feline character.

Since moving from feline to canine, his taste in dance and music has changed from generic techno trance to happy hardcore and industrial/EBM. He is an amateur Industrial dancer at his local club.

Jynx is the real life son of Tau Messer.